https://www.comparecellular.com/samsung-galaxy-phones/samsung-galaxy-note20-vs-note10/
Samsungs newest edition to the Galaxy Note family is the most impressive version yet, with improved funtionality and camera capabilities.
August 19, 2020

The folks over at Samsung have shown their handiwork once again, this time with two new additions to the Galaxy Note family:

While the higher-end Samsung Galaxy Note20 Ultra 5G features some impressive improvements over last year’s Note10+, the base model Galaxy Note20 5G feels a bit underwhelming compared to its predecessor.

Altogether, there are three separate Galaxy Note20 models to choose from this year—all for relatively steep prices. Both the Note20 and Note20 Ultra are more expensive than last year’s models with the Galaxy Note10 costing $949 at release, and the Galaxy Note10+ (128GB) costing $1,099 ($1,199 for the 512GB model).

Samsung Galaxy Note20 price comparison
While the Galaxy Note20 pricing is on the high end, carriers often run specials
for both new and existing customers, such as BOGO offers, device trade-in discounts, and switching incentives.

In typical Samsung fashion, the Galaxy Note20 and Note20 Ultra will have different specs where performance is concerned—similar to differences in previous Galaxy releases like the Note10 and Note10+. This is usually great, as it gives us the option to spend more money only if we feel we need the extra features. But the differences are a bit more glaring this time around as there are notable differences in cameras, build quality, and even storage capacity options, to name a few.

Samsung Galaxy Note phones have been known for their quality ever since their inception, which makes Samsung’s decision to replace its base model Note20 build with lower-quality materials a bit off-putting. The Note20 goes back to using Gorilla Glass 5, which is a step backwards from the Note10 (Gorilla Glass 6), and an even bigger step backwards when compared to the Note20 Ultra.

Samsung also has made the surprising decision to give the base model Note20 a polycarbonate backing—a significant step down from the typical full glass wrap we’ve come to expect (particularly from a $1,000 device). On the other hand, the Galaxy Note20 Ultra is the first phone to feature Gorilla Glass 7, which is supposed to be more scratch resistant and durable than any renditions that have come before it. 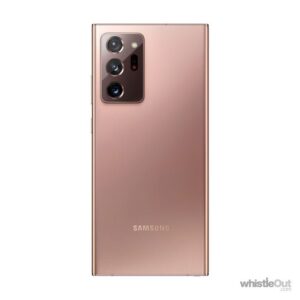 It’s also worth noting that this year’s Galaxy Note20 models are starkly different from one another in appearance, with the Note20 Ultra having a look more similar to what we’ve seen with previous models (squared corners like a notepad). The base model Note20, however, more closely resembles the Galaxy S models, with rounded corners, although it has no curved, edge screen. 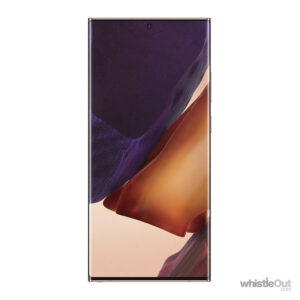 Arguably the most important distinction between the Galaxy Note series and other Galaxy phones is the addition of the S Pen—a proprietary stylus that adds helpful, but sometimes gimmicky functionality. The Samsung Note10’s S Pen introduced us to air commands, allowing for gesture control and some pretty neat shortcuts. The Galaxy Note20 picks up right where the Note10 left off, building on its air commands functionality, in addition to significantly improving its latency over previous generations. Decreased latency is a huge deal for the S Pen—the lower the latency, the more fluid and responsive the writing experience.

Samsung has done nicely over the years with its camera implementations, particularly with all of its flagship models. The Note10 saw a significant jump in camera quality from the Note9 series, moving from a dual lens camera system to the triple camera system that we see in this year’s models.

True to form, both the Galaxy Note20 models have newly redesigned cameras, with noticeably bigger—and potentially obstructive—housing and sensors, compared to their predecessors. That said, the Note20 Ultra is the clear front-runner in terms of camera quality—with an unprecedented 108MP lens included. The base model Note20, however, is using a much less impressive 12MP lens in its camera, although it still uses the triple camera system. You likely won’t notice any differences for typical, everyday camera-use but if having the best performing camera for your phone is important, you’ll likely want to lean towards the Note20 Ultra.

Additionally, this year’s Galaxy Note20 implemented 8K recording capabilities—though it only records video at 24fps (frames per second). It’s important to keep in mind that 8K files are massive, taking up about 8GB of storage per minute of video recorded. And because of the low fps, dynamic shots (high movement) will look more blurry than traditional 4K or other high-def recordings.

Apart from the obvious difference in screen size, there are differences in the screen refresh rates for each model, with the Note20 base model offering a surprisingly low 60Hz, and the Note20 Ultra model sitting at 120Hz. This is a bit unexpected, as both of last year’s Galaxy Note10 models supported the same refresh rate as one another (60Hz).

The refresh rate is relatively noticeable for the Galaxy Note20 and Note20 Ultra when compared side by side. But under most circumstances, 60Hz should serve your phone needs just fine.

A big selling point for the Galaxy Note20 series is its newly integrated gaming features, specifically the integration with Microsoft and its Xbox gaming system. The Xbox games pass—a feature typically reserved for consoles—has made its way to the Note20, with added controller support and the promise of on-the-go console gaming experiences. If you consider yourself a big gamer and like the idea of playing Xbox console games while you’re out and about, you’ll want to consider the more expensive Note20 Ultra as it has a much higher refresh rate for smoother gameplay.

Beyond just integration for gaming purposes, Samsung and Microsoft have made it possible to use apps from your Galaxy Note20 on your Windows 10 desktop. This is likely the first step in a series of added integrations between Windows and Galaxy devices—Microsoft has promised improved syncing with Microsoft 365 and its suite of applications sometime later this year.

Galaxy Note20 apps can only be opened one at a time on your Windows desktop. Microsoft plans to build-up this functionality in the future.

Is the Samsung Galaxy Note20 worth it?

In short: maybe. Depending on both where you are in your current phone’s life cycle and which Galaxy Note20 model you’re interested in, it may or may not make sense to upgrade to the Galaxy Note20 or Note20 Ultra. If you already have a Galaxy Note, for instance, it may only make sense to upgrade if you’ve skipped out on the last few generations of Galaxy Note phones. Of course, if the improved camera and gaming functionality are things that are important to you, it may very well be worth upgrading for those features. But keep in mind that the base model Galaxy Note20 has less of a quality-feel when compared to both the Note20 Ultra and previous Galaxy models.